The ALT Attribute otherwise known as Alternative Text is a word or a phrase that can be used within an HTML code to describe the nature or appearance of an image on a web page to its viewers.

The Alt attribute appears in a blank box that would normally contain the image. It is useful when an image link is not available because of a broken or changed URL, or when a visually impaired person wishes to better understand an online image.

They also give better image descriptions to search engine crawlers, aiding them to index an image properly.

The Alt attribute can offer you the possibility to include those valuable keywords in regards to search engine ranking. 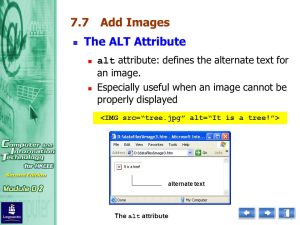 Many browsers will show what the alt text contains if you hover the cursor over an image containing the Alt attribute.
An Alt attribute starts out with the character sequence alt= and then contains the alt text within quotation marks.

For example, the attribute alt=”happy children waving at Easter bunny” might appear in the HTML image tag for a photograph of a school celebrating an event.

Be sure to create an Alt attribute that accurately describes the image and if you can, include a keyword but do not overstuff it, as that will get you in trouble with Google.

Simply focus on providing context to the image, with a keyword added if relevant. Keep it relatively short. Most screen readers, such as Orca, cut off Alt text at the 125 character mark.  However, should you require a longer description then be sure to add longdesc=”” to the HTML.

Any opportunity to give the readers a call to action, in the form of an image, must include an Alt attribute too.
For example, if a form on the webpage uses an image as its “submit” button give it an Alt attribute that describes the function of the button like “apply now” etc.

Always take the time to craft a proper Alt text for every image you add. In WordPress, if you just set a title and no alt attribute, it will, by default, use the image file name in the title attribute.  That is better than writing nothing, but you do not want your rank to be penalised for a small oversight, so put in the extra effort.